skip to main | skip to sidebar

You can now find the Dance Exchange blog on our website, www.danceexchange.org. Visit the blog to find past posts from "DX on the road", as well as posts from Liz Lerman and communications manager Emily Macel. Thanks for reading! 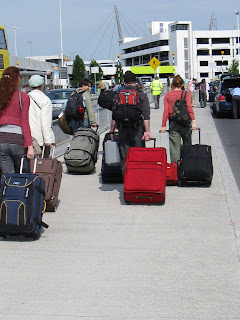 Posted by Sarah Levitt at 7:43 PM No comments: 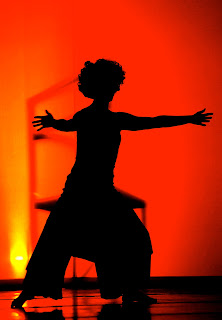 And the University of Maryland's campus newspaper has an article about it. Check out what The Diamondback is saying about The Matter of Origins:

"'This kind of investment in creation is exactly what a research university does', said Paul Brohan, director of artistic initiatives at CSPAC, calling Lerman 'wide-thinking' by noting her credentials in performance and academics....

'You're gonna be thinking and feeling and wondering and seeing,' Lerman said. 'And then you get some chocolate cake. It sounds like a great night to me!'"

"The Matter of Origins" in Gazette.Net! 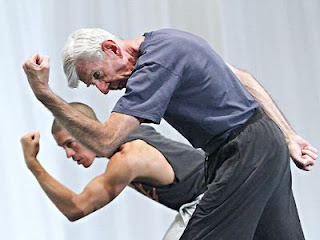 In less than 24 hours, the curtain will rise on The Matter of Origins. Research and development spanned three years and carried Liz Lerman as far as Switzerland, where she met physicists at CERN, the European Organization for Nuclear Research.

But Gazette.Net looks at the premiere's smaller, more personal side. Read Dennis Carter's article, and find out why Lerman says the show's got "an interesting sub-story."

"The Matter of Origins" Featured in Sunday's Washington Post! 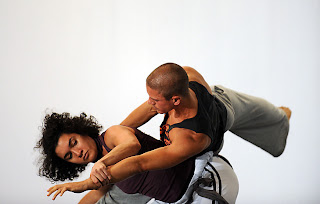 In the Post today, Liz Lerman Dance Exchange's own Ben Wegman talks about The Matter of Origins world premiere, which is inspired by physics:

"'It's incredibly dense material,' says Benjamin Wegman, one of the dancers who accompanied Lerman on her trip to Switzerland, who describes the immense scale of the CERN collider and the whole complex there as 'like you're in a Will Smith science fiction movie.' After all the thinking and discussing and rehearsing, though, he says he's come to appreciate what he calls 'the beauty' of physics.

'We see it as very dry, basic math,' Wegman says, but for physicists, the math is a language. 'The math is the purest form that they can understand things in. And it's like the world is just a translation for all these things they're thinking.'"

When I see the photo above (Wegman with dancer Paloma McGregor), I think about the language of movement. Check out Astrid Riecken's other photos, read the rest of Sarah Kaufman's article, and watch the Dance Exchange artists speak with their bodies during their September 10 and 12 premiere!

Posted by Liz Zastrow at 7:00 PM No comments: 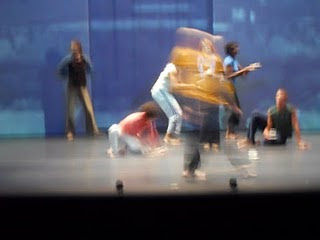 See that photo? It's a bit how I felt the other day, whirling to keep up with the notes Liz Lerman threw my way during The Matter of Origins tech rehearsal. Eleven pages, many asterisks (*), and a few hieroglyphics later, I'm happy to report that Lerman deciphered my writing.

What a treat to hear her think out loud: "Yes, Sarah!" when Levitt nailed the choreography, "...not sure about the bubbles here...ohh, scary...what is the relationship between Tamara, Thomas, and Ted...." (TA, TD, and T for short.)

As Lerman works with designers to refine the show, I anticipate what will surely be an incredible event. If you haven't yet, order your tickets today!
Posted by Liz Zastrow at 4:55 PM No comments:

Email from the road 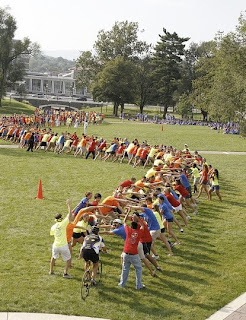 At James Madison University last week, Elizabeth Johnson and her team of Dance Exchange alums and adjunct artists created a DNA dance for the incoming freshman class of 4000 to link to their year-long study of the connections between science and art. During the residency, EJ sent an email to the company describing the experience:
Hey DX,
Thanks for the thoughts yesterday. We felt the love.

It was truly....wow. I am next to Wayles [Haynes]...and she says “transformational.” It was impressive to see the amazing power of all those people moving. We were awe-struck with the amount of participation and energy. Their gratitude was palpable. Visually arresting. They couldn’t stop dancing after the event was over. We will share the video.
Our team was incredible. They came in prepared to learn and to lead. [DX] alums Michelle [Pearson] and Gesel [Mason], working the bullhorns in the lower half of the quad and fixing some communication issues for the second round. They are incredible facilitators and Ralph [Glenmore] and Ronya-Lee [Anderson] each led hundreds of people in their teams too. Ronya-Lee says it was “exhilarating” and “memorable” and “hopeful to see many people rally around one thing.” Meghan [Bowden] had her own quadrant of 500 people. I personally thank Wayles and Meghan for putting the fun factor in this plan. Vincent [Thomas] helped to make a plan that was organized and efficient. Daniel [Zook] and Sam [Speis] worked the A team. [Daniel] was BEAUTIFUL and so very himself. A student said in his southern accent “that boy can DANCE.”
Onward, gotta run!
EJ
Read more about JMU's DNA dance and see the full video of the performance here.
JMU freshman performing their DNA dance
Photo by Diane Elliot
Posted by Sarah Levitt at 6:36 AM No comments:

...You send Elizabeth Johnson and a team of Dance Exchange adjunct artists to James Madison University's freshman orientation! The incoming class spent their summer reading The DNA Age by Amy Harmon, and EJ's task was to help them put what they'd learned about issues surrounding genetics into their bodies, and create a dance that the whole class could do together. 4000 freshman came together on JMU's quad to perform the dance they created. Here is a video of student reactions to the experience:

Where is the dance happening (today)?

After the sold-out premiere of The Matter of Origins last weekend at the University of Maryland, the Liz Lerman Dance Exchange is back in rehearsals to prepare for a two-week tour of current repertory. Catch us in Augusta, GA on September 25th, and at Wesleyan University on October 1st and 2nd.

Who gets to blog?